We had experienced a small earthquake for the first time 2 weeks previously in San Benito California. We weren’t sure what happened in that 4 seconds of the RV shaking and rumbling. Knowing there were deer, possibly bears, wild boars, and bobcats around, after I ran to the back it was confirmed that David hadn’t fallen out of  the bed a few times in a row, and wasn’t fighting something in the back room,  we thought maybe one of the local deer or a bear had jumped around on our tow dolly…haha! Earthquake made more sense once we found out that it was indeed a small 3.4 quake. I had been enough to slightly shake us and think we may be under attack. I guess small ones happen there multiple times a day and larger ones occasionally. We weren’t aware that this area, along with many others we had been in, was right on the San Andreas Fault. Thankfully, we were scheduled to move on from this location the next day, but we had already experienced on a minor scale a touch of the natural disasters that can happen in California. We also had made sure we weren’t near any wildfires previously.

After that we were in the Pismo Beach area for a few days that I wrote about here. and then took off from the coast and skipped over our planned stop in Santa Barbara, and plans to take a boat ride to see the Channel Islands National Park, because wildfires started breaking out all around Los Angeles. The biggest wildfire broke out right in the area we were headed to a few days before we were supposed to go there. We went further east to just a bit north of Los Angeles to Soledad Canyon Thousand Trails in Acton, CA instead. There we were about 30 miles from the closest fire. We were comforted in the fact that we couldn’t see any smoke over the mountains, but still kept a close eye on the fires to make sure we were in a safe area.

On our first day, we decided to take the quicker, and more scenic route through the Angeles Mountains to Pasadena. This drive was the most winding road we had been on so far, and we definitely wouldn’t want to take our RV on it! The views of the mountains were beautiful on this drive though! We also drove this route on the way home to avoid traffic. Still we had cars speeding past us on this crazy road in the dark since we were only going the speed limit. This is an extremely common occurrence in California! It seems like everyone is in a hurry and we just can’t move fast enough to get out of their way. In Pasadena, we went into town and picked a lunch spot, and had coffee at Intelligentsia, one of David’s favorites! After that, we drove to the Kidspace Children’s Museum that is located in a park across the street from the Rose Bowl Stadium and right next door to the Jackie Robinson Memorial field. The museum was fun and the kids enjoyed it! 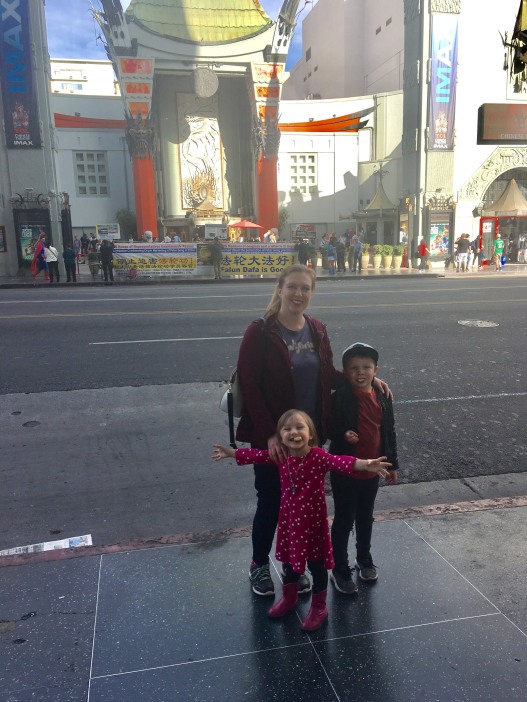 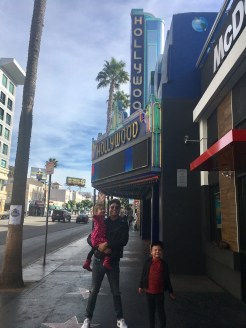 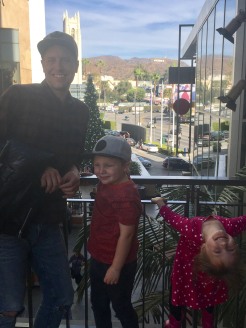 The next day we stopped at Hollywood Blvd. We stopped at a coffee shop, and walked on the walk of stars on both sides of the road. We went up the escalator to the shopping area where we could see the iconic Hollywood sign in the distance. Our time here ended with a visit to the Chinese Theater where we could see some of the stars hand and foot prints. Later, we tried to get a closer look at the Hollywood sign, but had a hard time following directions to any of the locations we saw. Leave in the comments if you know of easy locations to get to a closer pic with the sign 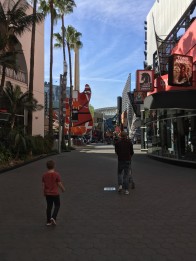 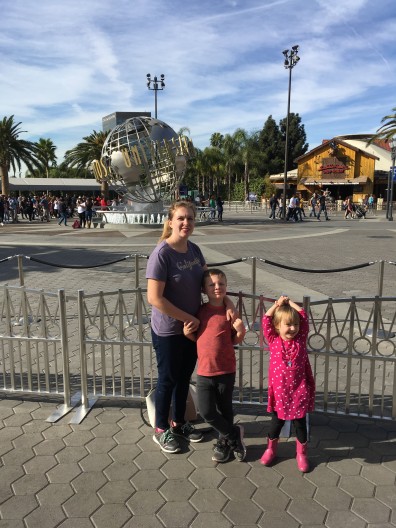 Of course we wanted to go to Universal Studios and/or Disneyland while we were in LA, but the price didn’t seem worth it at the moment since we had plenty else to do. We did head to the shops and restaurants and Universal Studios Citywalk. We just had to pay $25 to park here. We had only brought our car, but to our surprise, the parking garage there is big enough for RV’s and we saw a Class C parked in the garage for the day. It was time for a late lunch, so we gorged ourselves with magnificent meats and the salad bar at the Samba Brazilian Steakhouse for the largest lunch in history. To our surprise, kids 5 and under got to eat for free, and they obviously weren’t aware that we had one of the tallest 5 year olds ever, so we all ate like kings! It was awesome to get to see this area decorated for Christmas. There was a beautiful tree there and the kids got to see Santa. Even though it was 70 degrees, and we had on tees, it felt like Christmas! We looked in some shops, had a small treat at the scrumptious Voodoo Donuts, and headed home for the day. 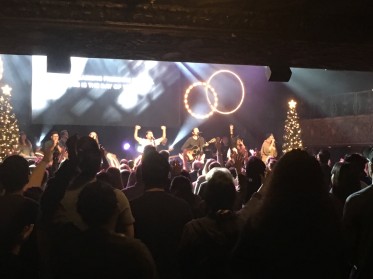 Our week in Los Angeles finished up with a visit to Hillsong LA on Sunday. This church meets in an old, beautiful Theatre downtown. We enjoyed a great service! 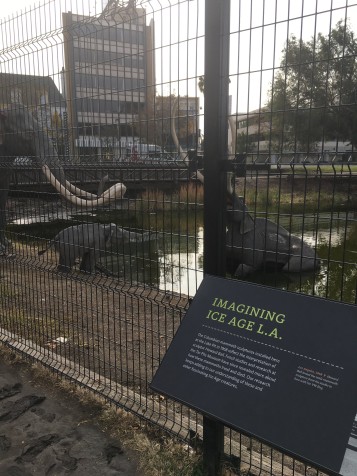 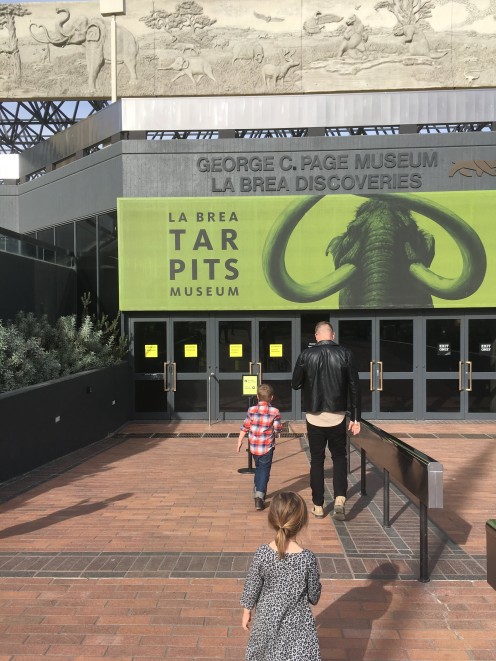 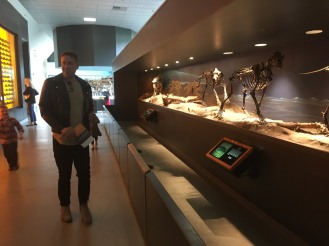 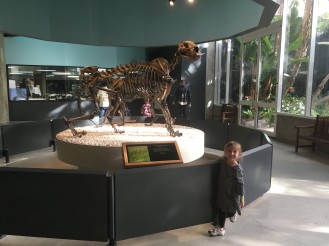 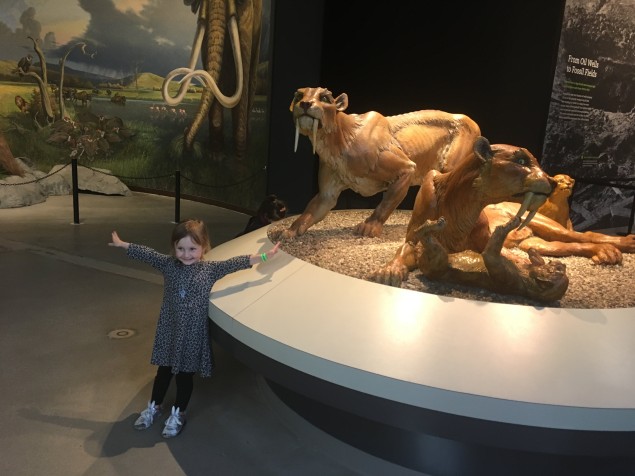 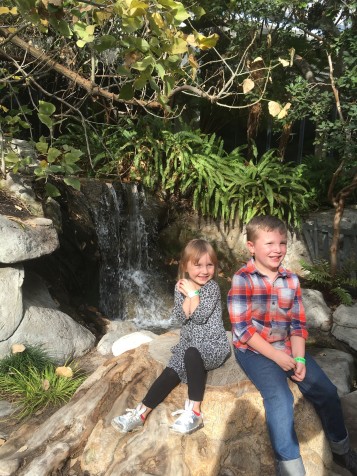 Then we went to the interesting La Brea Tar Pits Museum (a reciprocal museum in our ASTC membership). The tar pits were really cool because they are in the middle of the city and you can visit the multiple tar pits (some still active and bubbling) in the park-like setting where millions of animals from the ice age had gotten stuck in the pits and their bones have been extracted. Then you can see some of them in the museum. Even if we had only walked in the park and viewed the tar pits, this would have been a worthy stop. Though the museum was somewhat small, it was very informative and amazing to see the animals that were found there! 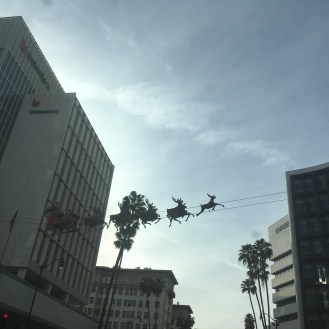 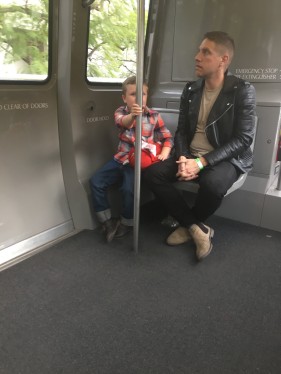 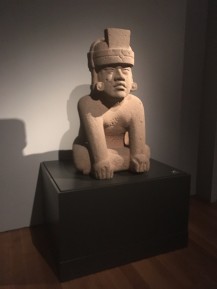 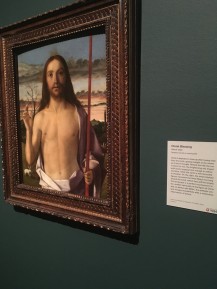 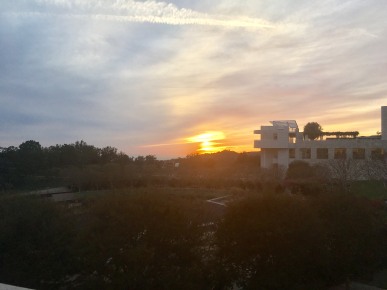 We only had an hour and a half to see the Getty, because we didn’t realize how big and awesome it was. It wasn’t nearly enough time as could have spent half of the day there, but they were closing at sun down, so we got to see the magnificent sunset there too. There were multiple buildings at the museum, filled with all kinds of famous art and artifacts, and wonderful gardens with sweeping views of the city and the ocean. It was $15 to park in the parking garage, but free admission otherwise, and would have been well worth an admission fee! This place has a very interesting history also, and we may head back to spend more time there when we are in LA again in the near future! 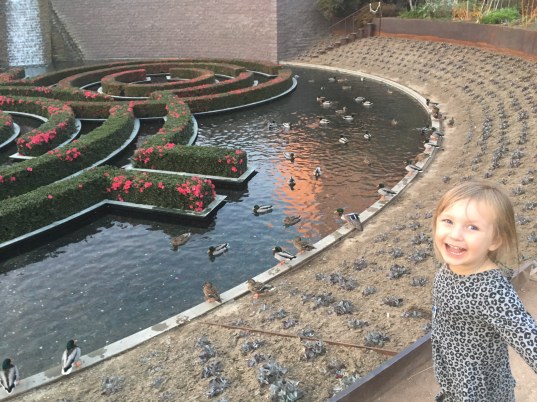 We had our Christmas in the RV with the kids before flying home to spend the holidays with family in Ohio and Pennsylvania. We kept it simple with stockings, and just a few gifts each, but the kids loved it! If we were all so easy to please, what a wonderful world this would be 😉

One thought on “Los Angeles – Hollywood, Museums, and Wildfires”